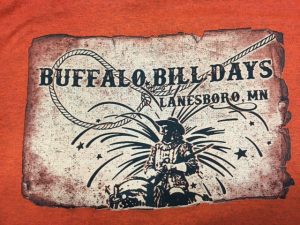 Lanesboro is full of activity all summer long, but one of the busiest weekends is always the first full weekend in August when we host Buffalo Bill Days, named after one of Lanesboro’s most colorful visitors.  William F. “Buffalo Bill” Cody came to Lanesboro in 1876 to visit David Franklin Powell, his old friend and fellow scout for the U. S. Army.  Doc Powell had moved to Lanesboro in 1875 to establish a medical practice.  At the same time, he developed a relationship with the Winnebago Native American tribe that was in the area who referred to him as White Beaver.  Buffalo Bill and White Beaver put their heads together and came up with the idea of a Wild West circus.  With the help of the Winnebago, Buffalo Bill put on his first Wild West Show at Nelson Hall in Lanesboro.  After a limited tour, Doc Powell returned to Lanesboro, but Buffalo Bill continued on to worldwide fame.

Our weekend has fun for all ages.  It all begins with the opening of the Beer & Brat tent at 4 p.m. on Friday.  Athletes (or even non-athletes!) can participate in the men’s softball tournament, a co-ed volleyball tournament, or the bean bag tournament.  Runners can take part in the 5K/1 mile “Buffalo Roam.”  Shoppers will enjoy the Market Place and Farmer’s Market along with visiting the local shops in Lanesboro.  The weekend is also full of music with performances by the Root River Jam Band, the Arnold Bradley Band, Raven’s Fire, a dj with karaoke, and Highway 30 (leading the community worship service on Sunday morning).  Street dances on Friday and Saturday nights will feature Trouble Shooter and JT & the Gunslingers.  Live professional theater is available at the Commonweal with performances of Souvenir and The Three Musketeers.  A sober shuttle is also available each night from 6 p.m. until 3 a.m.

Several activities will entertain the young and young-at-heart.  Take part in the kids’ carnival, kids’ basketball tournament, or the petting zoo.  A kids’ pedal pull, a waterslide on School Hill, and duck races will take place on Sunday.  The Cannon Old West Society will also be reenacting a robbery of Merchants Bank and having a shootout between the “Good Guys vs. the Bad Guys” on Sunday.  Bingo is available all weekend.   Don’t miss the fireworks on Saturday night or the Grand Parade on Sunday where Buffalo Bill makes an appearance.

A full schedule of events along with registration forms for the Buffalo Roam are available at the City of Lanesboro website.

Therese Graner not only serves on the Buffalo Bill Days Committee, but also serves guests at Stone Mill Hotel & Suites.  Whether you meet her at the front desk or talk to her on the phone, you will quickly recognize and appreciate her knowledge, her professionalism, and her friendly, helpful service.  Therese also plays a key role in Stone Mill Clothing & Gifts.  She has a keen eye for fashion and does a beautiful job of displaying the items in our gift shop.  Stone Mill wouldn’t be Stone Mill without Therese.