We knew “quiet season” was going to be anything but quiet as soon as Rick started planning to add a new room at the hotel.  Cheryl instantly started thinking of what to name it.  Now that all the dust has settled, we are very pleased to have the Buffalo Bill Suite and Bill’s Bunkhouse available for booking!  The suite is our roomiest room yet and named after one of Lanesboro’s most famous visitors.

William F. “Buffalo Bill” Cody came to Lanesboro in 1876 to visit David Franklin Powell, his old friend and fellow scout for the U. S. Army.  Doc Powell had moved to Lanesboro in 1875 to establish a medical practice.  At the same time, he developed a relationship with the Winnebago Native American tribe that was in the area who referred to him as White Beaver.  Buffalo Bill and White Beaver put their heads together and came up with the idea of a Wild West circus.  With the help of the Winnebago, Buffalo Bill put on his first Wild West Show at Nelson Hall in Lanesboro.  After a limited tour, Doc Powell returned to Lanesboro, but Buffalo Bill continued on to worldwide fame.  Even now, Lanesboro celebrates Buffalo Bill Days on the first weekend in August when Buffalo Bill himself appears in the parade.  It seemed only fitting to name our new room after such a colorful and enduring character. 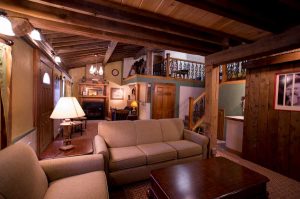 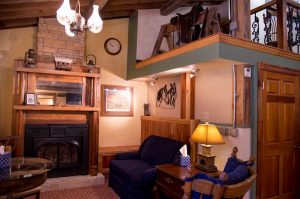 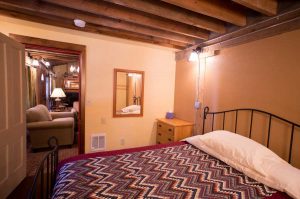 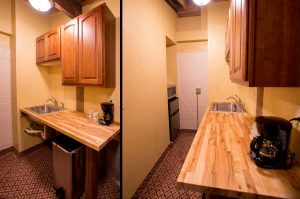 Located on the lowest level of the red Feedmill building, a private entrance in the back of the hotel leads you into this beautiful space.  A fireplace stands at attention on one wall with a cozy seating area surrounding it.  A second seating area gives you a place to watch tv.  A queen-size bed occupies a separate bedroom.  As with all our rooms, the Buffalo Bill Suite has its own private bathroom.  The kitchenette includes a small refrigerator, microwave, coffeemaker, and ample cupboard space.  The suite can be rented for a single night’s stay or for a two-night minimum on weekends during the busy season from mid-May through October.  However, with its privacy, space, and amenities, the suite would also be ideal for a longer stay in Lanesboro. 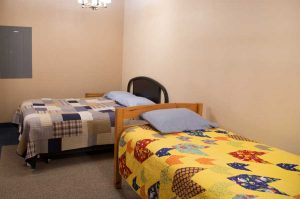 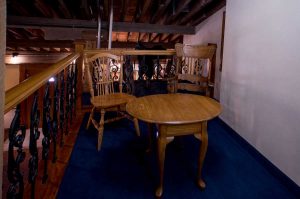 By adding on Bill’s Bunkhouse, the suite becomes a great option for families or groups of friends traveling together.  The Bunkhouse is on the second level of the suite, easily accessed via the staircase and open to the rest of the suite on the main level.  The Bunkhouse includes a queen bed, full bed, two twin beds, and a sitting area. 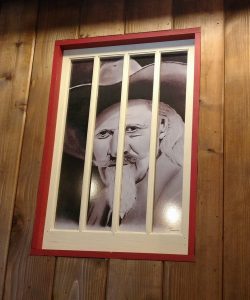 One of our favorite features of the new room is a piece of artwork.  Rick knew that he wanted a portrait of Buffalo Bill in the room.  While running errands one day he happened to see a brochure for Danielson Drawings with a sketch of…you guessed it…Buffalo Bill.  What made the discovery even better was that the artist, Corey Danielson, grew up in Lanesboro.  Rick immediately contacted Corey to see if we could get a large print of the sketch.  Corey was just as excited as we were to have his drawing of Buffalo Bill in our new room.  Corey had a knack for drawing even in grade school but took a long break from doing anything serious with his talent. Three years ago, he picked up his pencils and sketch pad and started drawing again.  Sometimes Corey just picks someone out of the blue to sketch (like Buffalo Bill).  More often, Corey is commissioned by clients to sketch one of their family members or even a pet.  You can see Corey’s work and find his contact information on his Facebook page, Danielson Drawings.  We are extremely happy and honored to have Corey’s artwork in our hotel.

There are so many reasons to visit Lanesboro…the Root River State Bike Trail, the Commonweal Theatre, Rhubarb Fest, Buffalo Bill Days, Taste of the Trail, Eagle Bluff, shopping, eating, peace and quiet…Stone Mill Hotel & Suites would love to be your home away from home during your stay.